The new contact point for all matters concerning the Smart City project "digital.interkommunal" of the municipality of Kalletal and the Old Hanseatic City of Lemgo has opened. The project office is located in Lemgo's Mittelstraße. From there, project manager Nicole Baeumer and her team will be in contact not only with the political bodies and administrations, but above all with citizens and other interest groups.

Lemgo's mayor Markus Baier put the opening of the project office in order: "This opening is the next milestone on our smart city path. This is where the threads come together as we explore digital possibilities and smart approaches together. This will involve a wide range of topics, from medicine to logistics."

Mario Hecker, mayor of the municipality of Kalletal, added: "The approval of the political bodies came last week, now things can really get started. For us, the focus is on good neighbourliness, between Lemgo and Kalletal, between the administration and the Fraunhofer, between the town hall and the project office. The fact that this is running so smoothly is due to several people, first and foremost Olaf Kapelle and Dennis Ortmeier from the two administrations, but also Annika Henze-Sakowsky from Fraunhofer IOSB-INA." Mario Hecker thanked the many people involved for the good start and, on behalf of both municipalities, presented project leader Nicole Baeumer with a basket of bread and salt for a successful time there when she moved into the project office.

The Fraunhofer IOSB-INA, based in Lemgo, will provide scientific support during the two-year strategy phase. Its director is Prof. Dr.-Ing. Jürgen Jasperneite: "For three years now, we have been on the trail of exemplary digital solutions for small and medium-sized municipalities in Lemgo, and that is why we are pleased to be able to continue with this. Our approach remains that the citizens can benefit as much as possible from the findings. There are many exciting connecting points where we are putting the use case first."

Over the next few months, Nicole Baeumer's team, which has yet to be completed, has several assignments at once: First and foremost is the development of formats for pandemic-friendly citizen participation. In doing so, the inter-municipal duo wants to benefit from the experiences of other model municipalities that have already implemented such formats in the past year. At the same time, the roadmap has to be defined, which will lead to the finalisation of the strategy and the subsequent five-year implementation phase. All of this will be done in close coordination with the relevant technical committees.

»digital.interkommunal« is one of 32 projects selected for funding in 2020. The motto was "Common good and network city / city network". Together, the municipality of Kalletal and the Old Hanseatic City of Lemgo successfully applied for funding last year to find solutions to typical problems of municipalities through Digitalization. Comprehensible, useful examples of digitisation are to be used to create trial fields that can be transferred to other cities and municipalities. Findings are to be made available to all municipalities. The five-year implementation phase will be preceded by a two-year strategy phase, which will be scientifically accompanied by Fraunhofer IOSB-INA. 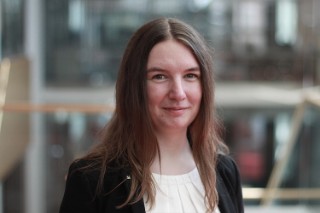